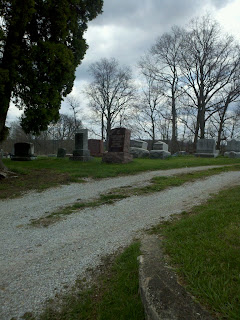 It has been a long time since I went out to take pictures in a cemetery: 4 months.
According to Billion Graves My last upload was Christmas Eve.
I had a lot of fun taking other sorts of pictures this past Winter with the nice camera my husband bought me for Christmas: bald eagles, especially.
He still does not understand why I am not using the new camera to take pictures at the cemetery but Billion Graves has their own system and even though my new camera has a GPS, it can't load their application so what is the point taking the pictures twice at the same time.  Updating will need to be done soon enough anyway. 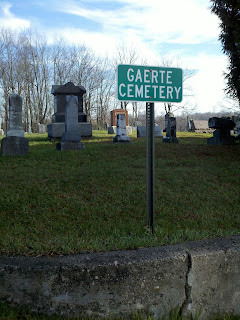 So...  in spite of the strong April wind, I decided to finish one cemetery I found last Fall before the cold set in: the GAERTE Cemetery, located on the east side of 500E between 1500N and 1600N in Perry Township.
My phone battery kept dying while I was taking pictures, probably because I was out of my service area and the search for service was the main drain.  Driving to Gaerte cemetery took me a good half an hour.  I was not going home with only 50 pictures just so I could recharge the phone...  I sat in the car a couple of times recharging but that got pretty boring so I went for a drive and discovered just how far from home I was.
The Gaerte Cemetery is not only North East of Gilead, which is way North already. It sits almost on the Fulton-Miami-Wabash tri-county line! 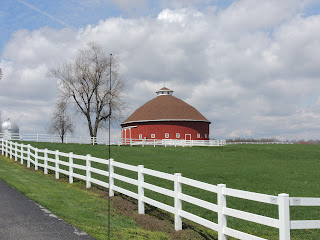 I am really glad I decided to recharge the phone in the car rather than go home.  Lukens Lake is nearby too although I didn't venture that far in the blue car... 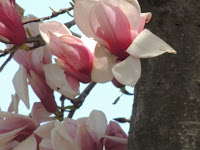 I took in some scenery then went back to the cemetery to finish the 'job'.
It took one more recharge even after I got back and it took me longer than I had anticipated but at least I can move one to another cemetery.  I think too that the cold affects the battery life.  I noticed that last Fall when I went to photograph RANKIN and Mt PLEASANT (Wabash Co) and of course this phone is getting old... )=
Getting back to the GAERTE cemetery.  Judge Tombaugh's readings are found online at the Fulton County Library site.  The cemetery is divided into four sections with rows running north and south, numbered from west to east, and the markers are read from north to south.  Readings were taken in 1975 and 1987.  These thirty years were not kind to some of the stones and they may be hard to match against some of the pictures I am uploading to Billion Graves but that will definitely be a tool I will use to help me decipher them or go over the work of another indexer if need be.
I however didn't follow his reading when I was taking the pictures as I didn't think to do so first. Besides some of the stones he read have since sunken into the ground or been knocked off their base, while new ones have been added in between or even replaced some that are now either gone or in a worse state of deterioration.  It was bigger than I thought it was, or maybe it's because my phone kept dying. 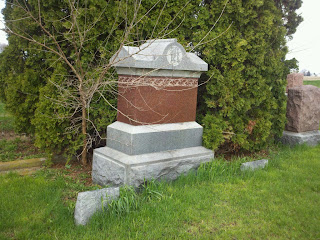 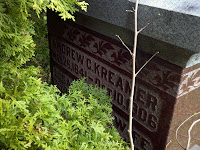 One stone was very tricky but would have been worse once there would have been full leaves on the bush...  I wonder why people plant bushes in front of stones...  They eventually stop being maintained and damage the stones... 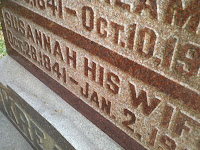 And when people try to see what's on them, they can't...
This bush was already almost too challenging...
But at least there is still hope for this one. 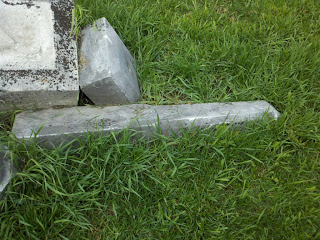 Some stones just won't release the names they once showed.  I often wonder why I even take the picture.  They  will likely remain unindexed because unreadable...  But Billion Graves said they hope their software will enable better detection... Let's hope.  Either way, the stone marks the resting place of an individual.  A person who walked along these fields and streams, who saw the beautiful sunrises and sunsets, who heard the birds sing, just as I get to today...  This is sacred ground...  People, tread lightly...