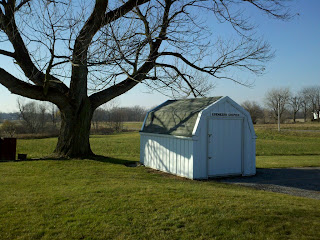 EBENEZER and MACEDONIA Cemeteries were the last two I had started last Fall that I needed to finish.  Morning cemeteries.  I needed a morning that wasn't going to be too dewy.

I took this picture at Ebenezer Cemetery last Fall before the cold set in.


EBENEZER CEMETERY is located on the southwest corner of the intersection of 1100N and Meridian in Union Township, Miami County, Indiana.  Readings were taken by Jean C. and Wendell C. Tombaugh in 1977, 1978 and 1987.  In that work, the rows run north and south, are numbered from east to west, and the stones are read from north to south. These are accessible online at the Fulton County Library site.  Once again I didn't follow the previous reading pattern, I simply went row by row starting from the front to the back, trying not to let the sun prohibit me from deciphering vital information. 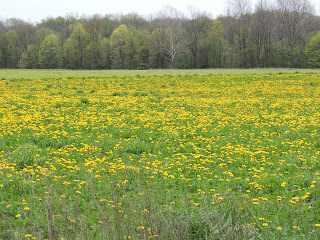 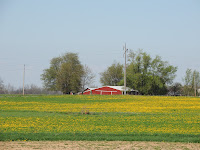 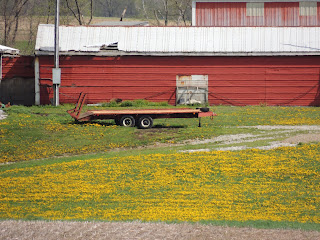 This time I chose to take 19 North past Doud's Apple Orchard, and enjoyed the scenery very much.  All I could see everywhere were fields of yellow.  Dandelions! Everywhere Dandelions!. I bet BethAnn's mom would have had enough of them to make quite a few pots of jelly!!! How my mind wanders when I do this!
As I had noted most of the graves at Ebenezer's faced the East so the morning sun helped keep any shadows off those stones but not quite so the ones facing West unfortunately.  Luckily the sun was already high enough in the sky that the problem was minimal.  Hopefully most of the information will be readable and I will be able to use the previous readings as well.
On the South side of the cemetery there was a bird house attached to a tree, not as rustic as the one found at Mount Pleasant Cemetery (Wabash Co) but quaint all the same and I tried myself at some close-ups of leaves etc.  Gotta practice... 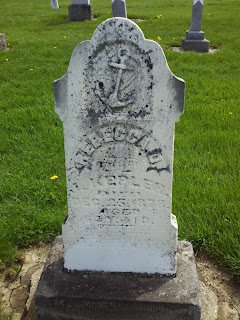 Find-a-Grave lists 296 interments at Ebenezer cemetery with 86% accompanied by pictures.  Not sure how up to date this information is as this is still an active cemetery and people are still being buried in there.  Lots of recent stones mixed in with some older ones.  I took a fancy for this one... Why an Anchor?... A quick look up about cemetery art symbolism states that an anchor is used to represent a mariner.  It would make sense if we didn't live in the middle of Farm country and if I had not done a background check that told me that Rebecca KEPLER's husband Jonathan was indeed a farmer...  Some further research indicates that an "Anchor – disguised cross; hope; steadfastness in Christ" - Now, this I can accept as they were Christians.  The Anchor stands out beautifully on the stone...  She died on Christmas Day... I wonder...  Let's make a small detour today...
Sometimes an obituary can reveal a lot about a person too.  Unfortunately the only thing I found that was connected to Rebecca here in terms of news is her son Charles' obituary and she is not even named.

(Using my subscription to Newspaperarchive.com)
CHARLES KEPLER FOUND DEAD IN BED AT BROTHER'S HOME.
Victim was Sixty-two Years of Age and a Sufferer of Asthma Which is Supposed to be Cause of Death. Charles Kepler, for ten years a resident of Fulton county, was found dead  in bed at the home of his brother, Martin Kepler, on Bancroft Ave., this morning, as the result of chronic asthma.  Mr. Kepler was born March-6,1951, in Ohio and has spent most of his life in Miami county, Ind.   For some time he has been making his home with his brother and sister, Martin V. Kepler and Julia Yike in this city and has been a sufferer of asthma for years from which he found but little relief.  For the past week or two the deceased has been troubled considerably by his ailment but yesterday seemed to feel unusually well.  Last evening Mr. Kepler retired as usual and this morning was called to awaken by his brother Martin – sometime before five o'clock.  Not receiving any answer to his repeated calls the brother went to Mr. Kepler's bed and shook the man to arouse him and only then realized that his spirit had departed.
Mr. Kepler was the son of Jonathan Kepler and leaves only brothers and sisters to mourn his demise, Martin V. Kepler, Julia Yike, this city, Mary Bain, Michigan City, Libby Bain, Missouri and Margaret Stopher, Wyoming.  The funeral will be held from Ebenezer church in Miami county, tomorrow.
Rochester Weekly Republican July 3, 1913


So his grave should be there too then... mmm  maybe one of those hard to read ones...  but someone on Ancestry.com has a picture of him in their family trees...  I hope the grave will turn up in the Billion Graves indexing! - it has not yet, though...
There really is a story behind everyone of these stones...
Anyway... 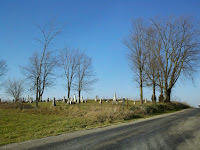 I finished taking the pictures at Ebenezer without having to recharge the battery.  That was quite a feat! And so I made my way back, using the GPS to locate Macedonia Cemetery.  I knew it wasn't too far from there, on the East of 16.  It didn't take long to find my way there.
Also called the "Wooleytown German Baptist", "Dunkard" cemetery, it is located on the west side of 100E between 900N and 1000N. The cemetery sits on a hill on the West side of the road, most graves facing East too.  Some of these old stones however are very hard to read, no matter how the sun shines on them, I'm afraid. 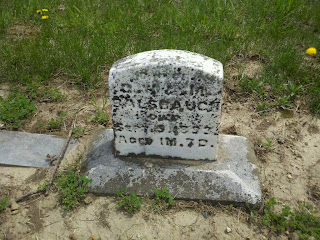 Luckily the lighting was just right for the majority of them, not to say I probably won't have to go back again.  But here again I will very likely use the previous reading done by Judge Tombaugh in 1987 and uploaded on the Fulton County.  These earlier readings can be vital in deciphering the engravings.
One thing I have noticed since I started doing this is that it is sometimes easier to see the words on the digital image than right off the stone in the cemetery.  Maybe it's the lighting.  Some stones are beyond hope unfortunately here too... 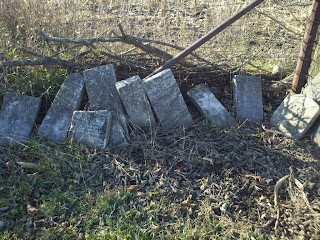 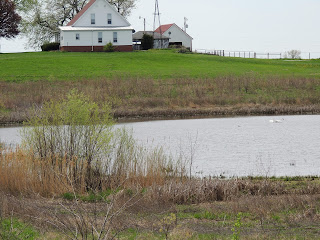 As I was taking pictures I noticed a pond South of the cemetery where two swans were swimming...
I could not resist... 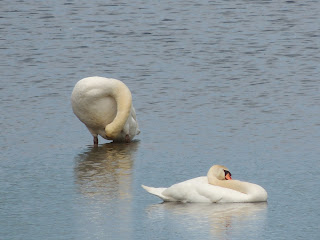